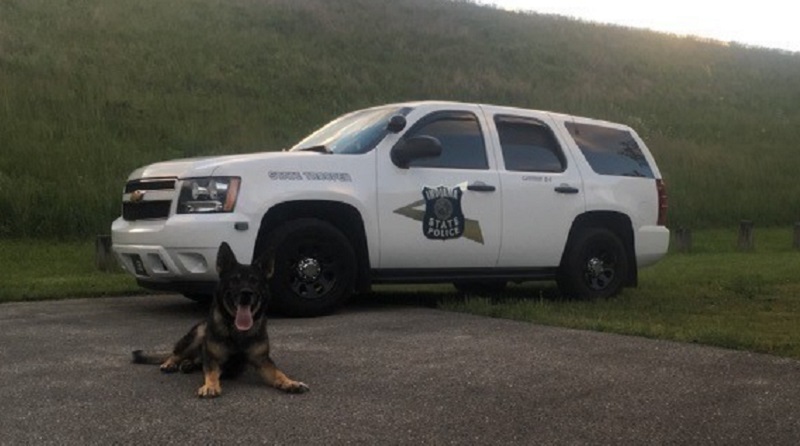 The Versailles Post of the Indiana State Police is welcoming a new police dog and saying goodbye to a retiring dog.

According to state police reports, Trooper Jordan Craig and his four-legged partner, Franky recently graduated from the state police K-9 Academy in Indianapolis.

Craig, a six year state police veteran, and Franky, a 1 1/2 year old Dutch Shephard and Malinois mix completed 12 weeks training together. They accumulated more than 400 hours learning obedience, narcotics detection, and other K-9 patrol functions. He is now certified in the detection of Methamphetamine, Cocaine, Crack, Heroin and Ecstasy.

Craig and Franky are beginning their work together in the Versailles District, which covers Bartholomew, Dearborn, Decatur, Franklin, Jackson, Jefferson, Jennings, Ohio, Ripley, and Switzerland Counties.

Craig’s graduation from academy with Franky means that Craig’s previous K-9 partner, Krieger, who is now 10 1/2, will be retiring and will live at home with Craig and his family. Since 2017, Krieger recovered more than 77 pounds of illegal drugs, assisted in 700 plus arrests, recovered 46 firearms, and assisted in seizing more than half a million dollars.