June is Alzheimer’s & Brain Awareness Month and June 21st is The Longest Day, a day focused on raising awareness of Alzheimer’s disease, which affects more than 5 million Americans.

o   Have the conversation as early as possible

o   Think about who’s best suited to initiate the conversation

o   Offer your support and companionship

o   Recognize the conversation may not go as planned

Don’t forget to join our sister station, WKKG, at the Columbus Walk to End Alzheimer’s again this year! If you’d like to sign your team up for the September 30th event click here! 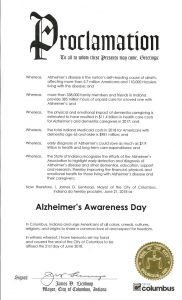 There are no upcoming events.

Pic of the storm over Jackson County. Have you seen any damage?

A Statewide AMBER Alert has been declared.

The Huntington Police Department has requested the activation of an AMBER Alert from Huntington, Indiana which is 105 miles north of Indianapolis.

The victim, Neveah O’Neal, is a 5 year old white, female, 4 feet 5 inches tall, 50 pounds, with brown hair and hazel eyes, and last seen wearing blue jeans, and paw patrol pink tennis shoes. Neveah was last seen on Tuesday, October 20, 2020 at 8:15 pm in Huntington, Indiana and is believed to be in extreme danger.

The suspects are unknown and last seen driving a gold Ford Ranger extended cab truck with a toolbox in the bed of the truck, and unknown plates

If you have any information on this incident, contact the Huntington Police Department at 260-356-7110 or 911.

What?? We're all getting rocks this year! 😲

We know your pain, Mike 😂

Another huge THANK YOU to our 2020 CAP Adult Prom Court members. You folks are troopers and we appreciate every single one of you! Congratulations to our CAP Adult Prom Queen, Mandy Wyant and CAP Adult Prom King JD Roberts!

MSN says Carmel has the best burgers in Indiana. We think South-Central Indiana has 'em beat! Who's really got the best??